Bulk renaming PDFs to their Title names from PDF Metadata

Recently, i realized that I have amassed a huge number of e-books over the years and have ended up dumping them within an e-books directory on my laptop. The problem that I now faced was identifying one book from the other because a lot of them had random filenames based upon where I had downloaded them from.

So I now had a couple of requirements:

After a little bit of looking around and experimenting around I finally got a Python based solution by Joseph Monaco to my problem. I then forked the orginal repo and added a couple of scripts to it to do my bidding. Now all that I need to do to auto organize all my e-books was this:-

And voila, all of my e-books were now auto renamed to their titles! 🙂

Come to think about it, I can work on repository a bit more to turn it into a full blown package, but then again, I’m feeling a bit lazy now that my goal’s served! Feel free to send me a Pull Request on GitHub if any of you want to automate it further! 😉

This is an interesting bit that I learnt about from an email in a mailing list by James Pryor.

To generate html output for code within a shell script you can use:

If you don’t want numbers and need a dark background you can use: 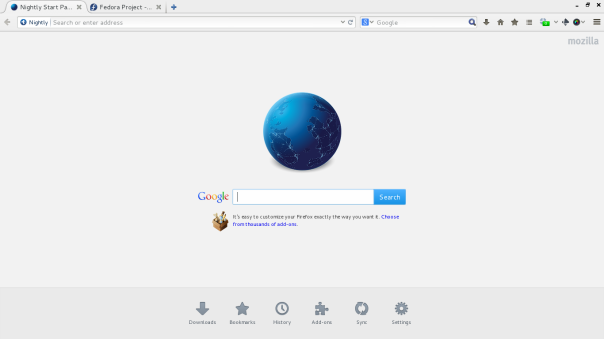 Screenshot of Firefox Nightly with Australis on Fedora 19

Are you a Fedora user who wants to check out the new Australis Theme for Firefox scheduled for release with Firefox 28? However, you are a bit apprehensive of letting go that stable release of Firefox in bundled within your Fedora installation by default, just in case something goes wrong with the nightly beta release.

If this is what defines your current dilemma, fear not. You can have both the stable as well as the nightly beta versions installed simultaneously in your computer in a few simple steps without any trouble at all! Here’s how to do it in case of Firefox Nightly version 28 [the latest release at the time of writing this post]:-

Step 2: Get the nightly package:-

Go to http://nightly.mozilla.org to get the latest available nightly build for your system.

Step 3: Extract the contents of the tar ball as follows:-

Step 5: Move the contents of the “nightly” directory to the installation directory:-

Step 6: Create a Symbolic link for the Nightly installation:-

Step 7:Run Firefox Nightly by typing the following within the command line or the alt+f2 launcher:-

Here’s a list of command line steps to install Skype on Fedora 19:-

Step 1: Open up the terminal and switch to super user:

Step 6: Congratulate yourself! You have successfully installed a non-free proprietary software on top of free Open Source software and bent down to corporate needs. Now go ahead and configure Skype according to your needs!

Voila!! You now have Sublime Text 2 installed on your machine. You may run it from the terminal or via the alt+f2 shortcut by simply typing in “sublime-text”.

Voila! You now have VLC media player installed on you computer! 🙂

This is something that I just learned how to do, courtesy of a documentation work that I need to for my college’s fourth semester evaluations, where the requirements state that I need to use Arial / Verdana fonts for my Project Report. The interesting part is that I’m a hardcore Fedora user who uses LibreOffice for all my documentation purposes and as obvious as it may sound, these fonts don’t come pre-installed in Fedora 18. Du-uh? Right? So, I had to distinctly install these fonts on my laptop. How did I do it? Here’s the breakdown.

First here’s a bit of a trivia for those who already don’t know this! (Read: Yack):

Microsoft TrueType fonts (TTFs) are quite commonly found throughout the web, usually specified in stylesheets. However, for Linux users, the most common of these TTFs don’t come pre-installed in most of the common distributions by default. Instead, they are replaced by generic equivalents, usually fallback fonts most commonly defined in stylesheets (again!). This is also true even case of offline documents such as spreadsheets, presentations, or plain .doc files.

And here’s the part on how to install these fonts! (Read: Hack):

You can install the MS core fonts by installing the msttcorefonts package. Here’s how to do it. The gist describes what to do, and the commands explain how to do using the Terminal. You may need superuser privileges or sudo configured. :-

Here’s the link to a really interesting article by Russel Bryant that I found on the web. Especially helpful for all my geeky gamer friends who keep on complaining about how they are not able to play Counter Strike or Team Fortress 2 on their Linux based systems. Enjoy!

If however you are a counter strike freak and this link doesn’t completely satiate your needs, you may try referring to this blog for Chris Daniel’s take on installing Counter Strike on Fedora 18.