The Mozilla Reps council was joined by William Reynolds (Community Tools, including reps.mozilla.org), Konstantina Papadea (Budget and Swag), Michelle Thorne (Foundation), Marcia Knous (QA), and Rosana Ardila (SUMO) as guests for the bi-annual meetup to provide their feedback on the discussions and help solidify the roadmap for the council in the upcoming year.

The main topic of discussion for day one of the meetup was:

How can we improve the Reps program to better enable Mozilla Communities that have impact?

The two primary topic areas on day one were program structure / goals, and leadership. We broke into sub-groups to come up with the bottlenecks and problems in these areas. Solutions were kept aside for the upcoming sessions. Items were grouped into three different categories that we felt caught all we wanted to capture – Council and Peers, Mentors, Reps.

Apart from these we also had discussions on a larger spectrum of topics. Michelle talked about Teach The Web/Webmaker plans for the year and how Reps can support it. Here we also had a discussion about events in general and what would be the best way forward in supporting event organizers worldwide.

Tristan Nitot came in to talk about TRIBE and personal development. Kate Naszradi dialed in really early California time to give us an update on the fast growing Firefox Student Ambassadors Program. Then Mary Colvig and David Boswell joined to discuss the topic ‘Enable Communities that have Impact’, aka One Million Mozillians. How we are going to scale by 10x in 2014.

On the second day, we basically threw out the written schedule, and decided to hack around a bit. The general mood of the room was to find solutions to the issues we identified on day one and start implementing them.

In the meanwhile, Pete Scanlon dropped in for a discussion on Engagement, the team’s role in 2014 Mozilla goals, and how Reps fit in and can make an impact. We also had a few more discussions on some other important topics that came up such as the Reps application process and how it can be improved.

The summary of what was discussed over the weekend can be expressed in a single line as:-

The goal for the ReMo program is that Mozilla Reps across the globe would be more engaged, empowered and enabled in the year 2014.

Ever since the time I first got involved in the Free and Open Source community I would hear about people’s experiences about FOSDEM [Free and Open Source Developers’ European Meeting]. If you are into Open Source communities, then apparently FOSDEM was the place to be. A few years back when I was nothing more than a wide eyed geek attending events out of curiosity to know what the hoopla was all about, I would at times meet people who would talk about someone that they know off, who had been to FOSDEM and I could not help but wonder about how big a tech event can be so big that people would would compare it to the holy grail of FOSS events.

Fast forward a few years, and I got to have a first hand experience of it and that too from the driver’s seat. Not only did I attend FOSDEM this year, but I was also one of the speakers at the Mozilla Dev-Room. I had a joint talk on “Developing Webapps for Firefox OS – The Efficient & Simplistic Approach” with Robert Kaiser (KaiRo). 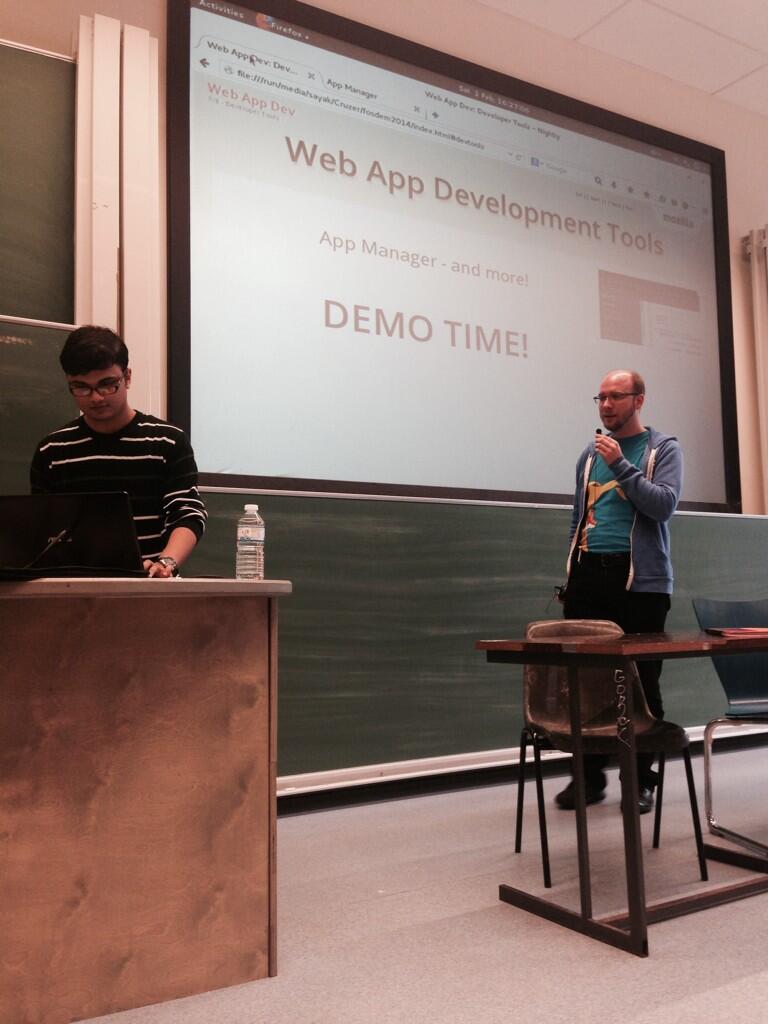 Me and KaiRo During Our Talk!

In all, this year, four of us [Me, Priyanka, Soumya and Srikar] were invited as speakers at the Mozilla Dev-Room at FOSDEM from India, and it was also the first one for all of us. Even though all four of us are pretty much veteran FOSS evangelists, yet FOSDEM was something that was pretty new to us. Needless to say, we were excited! It was like we were back to being the curious geeky newbie souls that we were just a few years back. And I must say, we enjoyed every moment of the experience to the fullest.

One of the most striking things for me was the fact that for the first time, in the last couple of years I felt nervous while getting on the stage [which, I’m pretty sure was quite evident in my talk]. However, I’m quite sure that it wasn’t peer pressure, or the number of people looking at me in the room [the room was packed with 350+ of the geekiest people from around the world], I’d guess it was more because of the fact that it was something right out of an adolescent day dream for me. Somehow, however, I enjoyed this feeling all over again. I felt like the ever too curious techie geek from a few years back again.

What I do want mention here is after quite a long time [a couple of years maybe?] I went berserk with swag again. I guess being surrounded by the choicest of official goodies representing all the things that you use in your everyday life does have that effect on one. And, I’m pretty sure I wasn’t alone as well. There were people all around me jumping from one booth to the other with the curious glean in their eyes which can easily compete with that of a bookworm left free in the world’s best library without a care in the world. Knowledge flow was the mantra here, and then of course there were the swags.

I have to confess, I ended up with a pretty good stockpile of stickers and other similar goodies, thanks to my sudden bout of childishness. But again, who can resist the temptation of picking up a few of the most sought after swags in the Free and Open source communities.

I won’t write much about how my talk went though, I would rather leave it for you to see and understand. For the sake of simplicity, I’m embedding the video recording of my talk along with the slides from FOSDEM here. Do check it out and leave me a note, about what you think of it. [Just remember, I was a bit nervous ;)].

A special note here for Benoit Leseul: You are one of the nicest and wonderful person that I have ever met. Thanks a lot for taking care of us during FOSDEM! 🙂